I came across this book via the brilliant Koeur’s Book Reviews. I love it when he goes off on a rant (which luckily for me, happens quite often), but when something gets high praise from him, I know I’ve gotta read it as well. Due to all the poopiness going on, I was WAY behind on my ARC pile, so it took a while to finally read this one. And, of course, ‘Koeur’ was absolutely right!

The entire blurb actually spoilers the shit out of the book so here’s only a part of it (as if anyone reads the giant blurbs anyways):

“Swordplay! Arsenal cubes and blade chasers! School bullies! Self-serving rivals! Scheming adults and soulless rebel plotters! Welcome to the world of cadet Hatter Madigan, who has just entered Wonderland’s Millinery Academy, where those born to protect the queendom train to become spies, assassins, and bodyguards. The co-ed world of a freshman Cap is extremely competitive, and as hard as Hatter’s mystic and martial studies prove to be, they are little compared to the more difficult art of successfully dealing with others vying to be the best.“

Okay, so the title had me frowning a bit at first. I don’t like it when abbreviations are created throughout the use of periods when it comes to titles.
Agents Of S.H.I.E.L.D.? Try typing that in your  Netflix quickly when you want to watch an episode. Try and not get annoyed to shits over it.
So yes, ‘H.A.T.B.O.X.’ -> nice for in the actual story but not on the cover of the book in my opinion. All nitpickers unite!

Ever since Hatter and his older brother Dalton’s parents went missing, Hatter and Dalton have lived at the Millenary Academy a.k.a. Wonderland’s version of Hogwarts. It’s quite a tough place to grow up in because emotions are considered to be a horrible thing there. Having inherited the greatness of his parents, Dalton already made it to the top of the Millenary world. Hatter, however, is just getting started and hoping he can make it past his first term and become a great spy for the Spade faction one day.
Just like at Hogwarts, there are four factions to be placed in. Not by a sorting hat this time (which would’ve actually been very appropriate for this story if it wouldn’t be a complete rip off), but by a couple of ancient caterpillars who can read the past and the future. Sort of.

When Hatter meets his fellow students, the usual types of characters are introduced: the rich bully, the over-achieving female student, and the guy who always gets picked on because of his appearance.

“Because a bully is only as powerful as others allow him to be.“

Now when you’re thinking, why on earth should I read this book if it’s all been done before?! My answer is: because it’s still quite original!

Set in the world of Lewis Carroll (did you guys know he was also a mathematician? I didn’t!)’s Alice in Wonderland, you know anything can happen basically, and oh boy, was this ever such fine motor oil to get my imagination going. If you take a look at the cover, you can already see this isn’t the typical Wonderland story.

There are blades, lots of blades, hats that can turn into blades and sharp boomerangs, swords, nunchucks, axes…almost all infused with magic! The magic system itself is very interesting because most of it comes from silk caterpillar threads. In fact, the entire university is made from those magical threads! And that’s where you have to use your imagination to the fullest extent. Which went great for me with everything except for the H.A.T.B.O.X. (Holographic and Transmutative Base of Xtremecombat). It’s basically a giant virtual reality box in which you can fight different scenarios to enhance your combat skills. If you would ask me what the box looks like, though, I couldn’t for the life of me explain it to you because I couldn’t visualise it based on its description.

Two more points of critique are:

1.We’re being introduced to a girl named Weaver in the beginning of the book, yet never see her again throughout the rest of the story. What’s the point of her being in there apart from the sake of being a potential love interest? Maybe she plays a bigger role in the other books.

2. I get that as this is a Middle-Grade book, the goal was to not turn this into a 500-page epos. However, I wish it would’ve been a bit longer so we could get to know the characters a bit better, without having to read all the other Hatter Madigan books (there are ones in which he’s an adult as well).

TL; DR: This is a colourful, fast-paced, action-packed story with both Fantasy- and Sci-Fi elements in it. A virtual reality machine, a ‘ghost’ that (in my head) looks like this 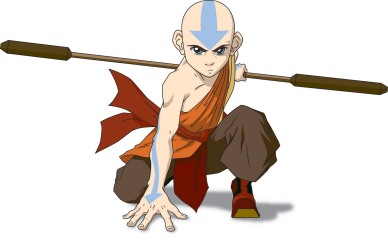 , an actual AT-AT scene taking place, and the most spot-on description has already been made by Koeur in his review:
it’s Harry Potter on acid.
I’m giving it four brownies and a firm recommendation for when you’re in the mood for some familiar, yet original fantasy.

Here’s a quote especially for Liz on how to help her solve her dust bunny problem:

“”Oh, how cute!”, Astra exclaimed as a dust bunny hopped past, leaving a trail of white in his wake. The creature stopped and looked at Astra, twitching his whiskers. His eyes widened in fear and he exploded in a cloud of particles.”…”Dust bunnies are awfully sensitive. If they’re afraid that someone is about to clean their habitat…poof!” “

Thanks to the publisher for providing me with a free copy via NetGalley in exchange for an honest opinion!

P.s.- Did you sign up for my blogiversary giveaway yet? It’s ending this Friday!