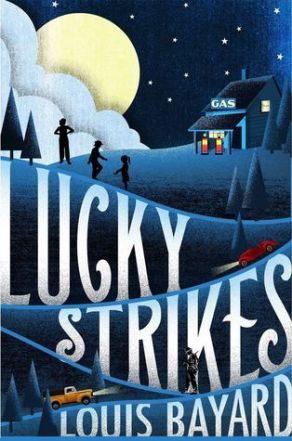 Okay, to be completely honest, I requested this book because of its cover. I mean, of course, I also read the blurb, but the cover is what really tickled me bloomers: gorgeous! Thankfully, after having read the book, I can say the same for the actual story as well.

“Set in Depression-era Virginia, this is the story of orphaned Amelia and her struggle to keep her siblings together.

With her mama recently dead and her pa sight unseen since birth, fourteen-year-old Amelia is suddenly in charge of her younger brother and sister, and of the family gas station. Harley Blevins, local king and emperor of Standard Oil, is in hot pursuit to clinch his fuel monopoly. To keep him at bay and her family out of foster care, Melia must come up with a father, and fast. And so when a hobo rolls out of a passing truck, Melia grabs opportunity by its beard. Can she hold off the hounds till she comes of age? “

I think this might be the first time I only made one note on my Kindle while reading. I wasn’t even searching for things to criticise because I was too damn busy with reading. I know right?!

And now that I’m done, I still can’t think of anything negative, or anything that I would’ve liked to see differently at all. Which means this book is damn well near perfect.

I cried twice. TWICE! One time in the beginning, when Amelia’s mother died (it’s no spoiler if it’s in the blurb, right?) and then another time near the ending (which I did could not have predicted to play out the way it did).

It’s 1934 and 14-year-old Amelia, better known as Melia, runs a gas station together with her mother. She also has two younger siblings, Earle and Janey, who help out when they can, but are more focussed on being ‘regular children’ and going to school.

I LOVED that both Melia and her mother are self-made car mechanics. They can simply hear what’s wrong with a car and then fix it. Wearing car mechanic matching overalls and taking care of shit the same way a man would do is very impressive, especially because this is set in 1934 when women were still supposed to wear dresses, and cook and clean for the menfolk. Well, as Melia could’ve said: “Ain’t nobody got time for that!”.

The story is told in the first person by Melia, and she writes the way she talks:

“I set there just in case she did“

“…and they come right into my bedchamber…”

It only took me two pages or so to get used to that. It’s not like you have to try very hard to decipher those kinds of phrases.

It’s a good thing Melia’s such a strong character because after her mama dies, she has to take care of her siblings, keep the gas station running, and fight off the evil Goliath figure,  Harley Blevins, who wants to claim the gas station and add it to his gas station collection.

When Hiram Watts, an old and smelly hobo, literally comes falling out of a truck onto one of the gas pumps of Brenda’s Oasis (the name of the gas station), Melia decides to take him in and convince the outside world that Hiram is her daddy. It’s going to be a challenge to do so because that outside world is rather judgemental, having called Melia and her family the ‘Gas Station Pagans‘ (which is also the original title of this book if I’m correct) because they refused to go to church and whatnot.

But guys, this book….it has everything you could wish for! Or maybe I should say that it has everything that I could wish for. It has dysfunctional characters, a strong heroine (who’s far from perfect, mind you), a little bit of awkward romance, unconditional love, suspense, heartwarming actions, and gut-punching moments.
The writing is superb, I was totally convinced of the characters and the world surrounding them. Even though at times, nothing happens at all, I wasn’t bored for a single second during these 320 pages.

Remember I was talking about the only note I made while reading? I bet you’ve been dying to read about it, skimming through the boring parts to get to it. OR, you just scrolled up again to look for it because the thought of it already left your brain again. Either way, here it is:

“Fuck me, this is like Little Women with gas pumps in Virginia!“

And it sort of is! A book with strong female characters yet still leaving room for the male heroes to shine as well. Melia would be the Jo of this story, abbreviated name included. Brilliant. I’m giving this one 5 shiny brownies and a firm recommendation for basically anyone. It’s targeted at young readers, and anyone who’s over 12 years old should be able to enjoy it!

Thanks to the publisher for providing me with a copy via NetGalley in exchange for an honest review!

Oh my, it’s May again! Normally, I get a tat bit depressed around this time of the year [...]