When I first heard of this series and Googled it, I couldn’t help but being pulled in by the colourful covers with Victorian and mythical elements on them. Then, when I read it was steampunk fantasy with a good dash of humour, I was sold. After finally getting to reading this book, I noticed that the entire story was written in dialogue, exactly like this synopsis…

“I say, this fantastic craft you have built has transported us to a new world, Mr. Temperance, eh hem?”
“Yes, Ma’am, Miss Plumtartt, Ma’am! Gosh, we find ourselves among many mythological beasts of outrageous legend. It would take three of me to make just one of the dwarves that live around here.”
“Yes, quite, and I find that there is no shortage of troll, gremlin, or magical creature to assail us in our destined quest.”
“You sure are right about that, Ma’am. In fact, I think we have gotten embroiled in a sweeping, high fantasy saga of epic proportions!”

You’re probably thinking…”What the flying horse cadaver?!” right now (or something alike). That was exactly what I thought (or something alike). Always having finished every book apart from Finnegans Wake so far, I feared this was going to be a loooong ride.
However, to my utter and pleasant surprise, it wasn’t!

A Journey of Temperance is actually book #9 in The Adventures of Ichabod Temperance series. I’m not one for starting halfway into a series. It never works. So if an author comes to me with book #9, it means I would have to read the previous eight to get up to speed with the story. Needless to say, I have not read the previous eight books in this series. The author assured me this book was functioning just fine as a stand-alone novel, and for once, I decided to take the plunge. The author was right.

So back to the dialogues! My initial reluctance wore off after about one chapter. Another chapter later, I hardly even noticed it anymore. The surroundings and actions are described throughout the dialogues and it bloody works?! All I could think once I got into it was that this was very cleverly done. Each character has a couple of specific words which greatly help to define who’s talking when. Then there are the personalities and accents; I was hardly ever wrong in understanding which character was speaking.

The main characters are Mr Ichabod Temperance, a brilliant engineer from Alabama with poor social skills, yet who’s always helpful and polite. Especially when it comes to the secret-but-not-so-secret love of his life, Miss Persephone Plumtartt. Persephone is the daughter of the late super scientist Professor Plumtartt. She has inherited a good portion of her father’s scientific skills and insights. Together, Ichabod and Persephone make a great team when it involves coming up with solutions and inventions. Or fighting evil creatures.

Of course, reading about the characters from their literary day one is always the best way to get to know them to the fullest. However, as I’ve already kind of mentioned up here, you really don’t need to read any of the previous books to dive into this one. I got acquainted with the characters and their relationships pretty darn fast.

The story itself is loosely based on LOTR, but also subtly takes the piss out of it (in a most respectful way). Miss Plumtartt, Mr Temperance and Mr J.P. Morganstern (a despicable businessman who hired Ichabod to create a means of faster travels for him) go on a journey in a steam-powered drill machine which accidentally goes off course and ends up in Middle O’Earthhe. Which is literally the centre of the earth, where apparently, there’s another smaller version of a planet; its own sun included. Evil lurks in the form of an ancient high elf who’s after an even more ancient artefact to take control of Middle O’Earthhe and introduce another Age of Darkness there.

The three travelling companions encounter dwarfs, dragons, trolls, oreorcs (who must be quite appetising), wizards, fairies, and many other mythical creatures.

The journey also comes with a lot of goofy humour:

“Truth be told, Lord von Stratusbourne, I have never cared much for these Gothic Elves. I find their omnipresent black finger nail polish off-putting. Let us go and remove the mascara from their pale faces by cleansing fire.“

Besides the puns, there are also numerous references that will sound like music to the ears of the average geek. Examples are D&D, LOTR, Disney, the work of M.C. Escher, and the urban myth of The Brown Noise*.

All in all, if you’re in for something different, something goofy within the Fantasy genre, you might enjoy this as much as I did. I’m being honest when I say it’s definitely not for everyone. A tip to spice up your reading experience: let some unsuspecting person read it to you. Oh, and insist on them doing ‘voices’. A ferocious dwarf warrior has never sounded so feminine coming from the mouth of my husband.

I’m giving this four brownies because it was a lighthearted read and exactly what I needed last week.

A big thank you to Ichabod Temperance for generously providing me with a copy of his book in exchange for an honest opinion!

* If you were wondering what the urban myth of The Brown Noise is, I challenge you to put your speakers on max.and listen to this YouTube video.
(Not safe for work unless you have come prepared yourself and want to try it on your coworkers.)

13 Comments on A Journey of Temperance by Ichabod Temperance 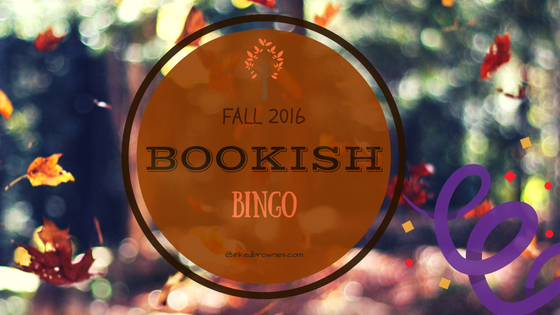 After seeing several people participate in this, I was like: I love fall. I love bingo. I love [...]