Witches, naturalists, talking wolves, science and magic. All taking place in 17th century-Holland. Damn rights I had to read this one!

“Mina stands up for animals. But can she stand up to her parents’ killer?

Descended from freed slaves, orphan Mina trains as a scientist in The Hague. She studies the animals in the nearby woods and saves them from harm whenever she can—much to her mentor’s dismay. And, of course, as a good scientist, she doesn’t believe in magic.

But when her parents’ killer, rumored to be a warlock, escapes from prison and kills again, she must question everything she knows in order to solve a mystery and save her world from destruction.Book 1 of The Naturalist takes the reader on a magical adventure into the Dutch Golden Age.”

It’s the year 1647 and the prologue kicks off with the hanging of a witch in the woods near The Hague, Holland. The Hague was part of the Dutch Republic, also known as the Republic of the Seven United Netherlands, also known as the United Provinces (and some other names, geez, someone couldn’t make up their mind). Here’s a simplified political map to get a better idea of the country back then. The Hague is located roughly in the middle of the province of Holland, near the sea.

So a witch was hung. That was something quite uncommon in the United Provinces during that time period. Due to the advancing science and Calvinism, people simply didn’t believe in witches anymore. There are more arguments for the non-existence of witch hunts in these parts, but you can look those up yourself if you’re interested in the topic. The Southern Netherlands/Spanish Netherlands surely took a while longer to stop prosecuting witches: around 1720.

Since no one really believed in witchcraft anymore and witch hunts were something of the past, the hanging of Leonara went by quietly, her body being left to rot while still hanging on the noose. However, Mina Walraven, the protagonist of the book, finds out about the hanging soon enough. Her parents were killed by a man named Gregor and it appears the only thing which kept him locked up in prison all this time was Leonara’s witchcraft. With Leonara gone, he’s on the loose again, seeking  vengeance and leaving a trail of destruction. Not a very good trail, though, because no one has been able to track him down…

When Mina is attacked by Gregor’s evil pet, a magical owl with the face of a human, she is saved by a giant wolf named Basa. When she can hear Basa talking to her, Mina’s life will never be the same again. Especially because she doesn’t believe in magic. Or does she now? Make up your mind woman! I know I would believe in magic after a wolf starts talking to me. Then again, this is Holland we’re speaking of. It could’ve been any type of drugs as well…

I loved Mina’s character. She’s a female scientist in training, which is pretty cool in itself, but a female scientist in the 17th century is like, übercool. She has a mind of her own, hardly ever listens to what anyone tells her to do (especially when it comes to men) and soon discovers she has the ability to talk to all animals. I thought it was pretty funny that most of the animals only thought about food. I wouldn’t be surprised if it were really that way!

Basa, the wolf, is just a big badass cuddly bear. There’s a scene in which he and Mina sleep together in the same bed, spooning I believe, which is just awesome. If my dog wouldn’t snore like a congested walrus, I’d love to spoon with him as well.

There are quite a few characters in this book (not too many, though) of which I will only highlight a few of my favourites:

Most of the characters are well drawn out. A couple of them, though, are either bland or extremely stereotypical. The master villain in the book, Gregor, is one of the latter ones. You can just picture a typical looking villain with long greasy hair and such, going “MUAHAHAHA!”. He also has a way of showing up everywhere, yet still can’t find the things he’s looking for (my husband has the same issue, though, so I’m not going to say it’s completely illogical).
Joris, Mina’s cousin, seems to be suffering from some kind of borderline personality, going all the way in his extremely contradictive emotional reactions.

These things, plus the final showdown, were a bit disappointing. They certainly made it harder for me to rate this book properly, especially because they are the only disappointments I encountered. The writing style is very good, I only caught one typo and no strange grammar flows whatsoever, which is pretty amazing if you consider the fact that I read the ARC version. It’s truly a page turner with plenty of action and magic; I believe I finished the last 70% of the book in one or two days.

Then there are the historical facts. I absolutely loved reading about the old cobbled streets of The Hague and about the stadtholder’s home. I’ve been there a couple of times myself last year and really, add some horses to it and you’ll feel like you’re in the 17th century again. 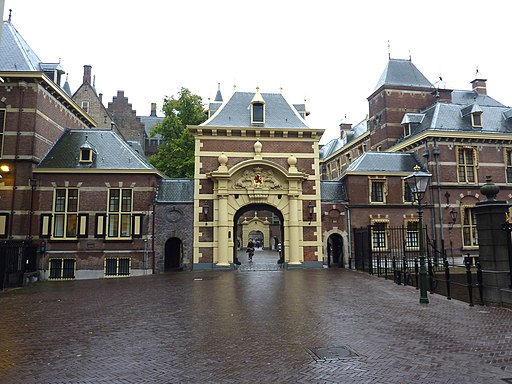 I also loved reading all the Dutch names in an English text. I couldn’t find any mistakes whatsoever, so I’m concluding the author did a great job at researching things.

Based on my level of enjoyment, I decided to give this book 4 brownies. Bare in mind that my opinion might be a bit biased because of all the Dutch history. Then again, it did make me an extra critical reader…

An ARC of this book was provided by Victory Editing via Netgalley in exchange for an honest review.

21 Comments on The Warlock and the Wolf by Delfy Hall