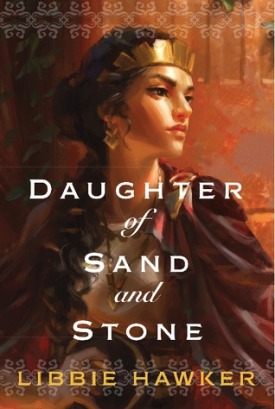 I figured since I studied history and Arabic, I would really dig this book. Like, REALLY. After reading it, all I can say it that I liked it, but it didn’t offer me the greatness I was expecting.

Zenobia, the proud daughter of a Syrian sheikh, refuses to marry against her will. She won’t submit to a lifetime of subservience. When her father dies, she sets out on her own, pursuing the power she believes to be her birthright, dreaming of the Roman Empire’s downfall and her ascendance to the throne.

Defying her family, Zenobia arranges her own marriage to the most influential man in the city of Palmyra. But their union is anything but peaceful—his other wife begrudges the marriage and the birth of Zenobia’s son, and Zenobia finds herself ever more drawn to her guardsman, Zabdas. As war breaks out, she’s faced with terrible choices.

From the decadent halls of Rome to the golden sands of Egypt, Zenobia fights for power, for love, and for her son. But will her hubris draw the wrath of the gods? Will she learn a “woman’s place,” or can she finally stake her claim as Empress of the East?

The first third or so of the book is great. It has everything you want from an Arabic history story: jasmine, musk, camels, sand, veils, honey, figs, swords, nightly ambushes in the desert and a more realistic version of Aladdin-romance. In fact, I was singing this in my head a lot while reading Part 1 (the English version that is, this Arabic version is just cool for display):

When the story jumped ahead in time to Part 2, I already felt a bit disappointed, not having learned more about the time interval in between. However, when the book makes another time jump to Part 3, I became truly disappointed. Zenobia’s husband dies and woop, we’re at the part where she sits on the Egyptian throne (these aren’t any real spoilers by the way because they are historical facts). There are explanations here and there, telling us how she got to that point, but I would’ve loved to read about it directly instead.

Unlike Cleopatra, Zenobia is a less well-known figure by the average person, but nonetheless just as impressive: the second woman who took Egypt out of the hands of the Roman empire. Not a great deal of information on Zenobia has survived the hands of time but enough to create a general chronological line of events. Libbie Hawker filled up the rest between those lines with a fictional story. She did a good job most of the time, yet I just couldn’t get sucked into it like I hoped I would.

Zenobia is a very arrogant and unlikeable person. Maybe she had to be this way to become such a powerful woman and conquer Alexandria, but it makes the reading experience a lot less pleasant if you just can’t sympathize with the main character. At one point, when camel droppings hit the fan for her, I could only think ‘serves her right’.
Denying the love of her life, neglecting her son, ignoring all common sense and feeling delusionally superior don’t make her a loveable person, really.

What’s cool, though, is that the powerful male characters that surround her (Roman emperor Aurelian, her first husband Odaenathus (governor of Palmyra), and Zabdas, personal bodyguard and general of Zenobia’s army) all have great respect for women due to Zenobia herself. Plus, I have to admit, it’s pretty impressive to look at her Palmyrene empire here: 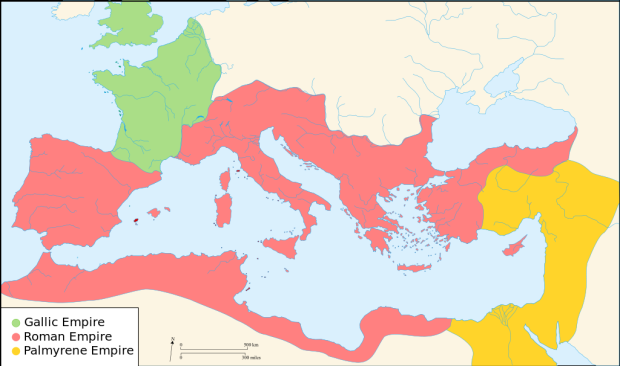 I ended up giving this book 3 stars. With a 100 pages more and/or a more relatable protagonist, this could’ve been a higher rating. Now it just feels like some great historical fiction has been cramped up in the length of an average YA-novel.

As an extra note, I’d like to mention that Palmyra, the city of Zenobia’s heart, the reason for most of her actions, has been taken by IS in 2015. The despicable assholes destroyed several ancient temples and other buildings there and by doing so, erasing 2000-year-old tangible history from the face of the earth. GG.

9 Comments on Daughter of Sand and Stone by Libbie Hawker

Review: The Girl Who Drank the Moon by Kelly Barnhill