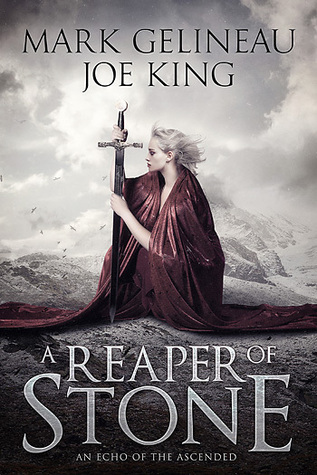 It’s that time of the month again! Not the one which involves Ibuprofen and men having to go down to the old pub instead, but that time where Cindy and I are teaming up again for a double review!*

*Yes, it’s not Thursday today and yes, there’s a ridiculously tacky white line crossed throughout the word ‘Thursdays’ in our awesome graphic. We both just weren’t able to do this during the last couple of Thursdays and when we finished this review last Saturday, we were way too impatient to wait until the next Thursday. Lord knows on what day the next Double Review will take place, but it will be next month! Probably!

“A Lady is dead. Her noble line ended. And the King’s Reaper has come to reclaim her land and her home. In the marches of Aedaron, only one thing is for certain. All keeps of the old world must fall.

Elinor struggles to find her place in the new world. She once dreamed of great things. Of becoming a hero in the ways of the old world. But now she is a Reaper. And her duty is clear. Destroy the old. Herald the new.”

What were your thoughts/expectations before reading this book?

Cindy: Hm.. I try not to do a lot of thinking lately (fatherly advice), but the cover seemed awesome and I really liked the blurb. So when Anne gave this book as an option for out buddy read, it was not a difficult choice to make :’) I’ll never get enough from fantasy, NEVER.

Anne: I can’t remember ever having read something by a writer duo, so I was quite curious how that would turn out  (EDIT: I read Weis&Hickman *facepalms*). The cover and the blurb made me think this was going to be awesome as well. The girl on the cover kinda looks like Daenerys Targaryen. With a huge sword. *makes heart with fingers*

Who is the main character and what did you think of him/her?

Anne: The main character is Elinor, the King’s agent, lieutenant and/or Reaper. The term Reaper made me think of souls and, well, death, but being a Reaper of stone literally means being a reaper of stone. Keeps and castles in this case. Although there’s also a slightly more magical meaning to it in this story, but I’ll let you find that out for yourselves. So yes, back to Elinor. Wow, she is one bad ass chick! There are different varieties of bad ass chicks, though. You have the ones who are bad ass, but don’t feel any empathy or are terribly arrogant. And there are the ones who know how to fight like a true warrior but keep whining about their emotions constantly. Elinor is neither one of these. She has empathy but doesn’t whine like a baby. And her fighting skills are excellent, but she never becomes arrogant about it.

Cindy: Anne… you’ve said it all… girl… leave something for me okay! But, just to give my opinion, Elinor was really awesome 😀

What about the other characters?

Cindy: Yeah what about them? Well, first of all, they were there, and second of all… yeah they were actually there. No, just kidding. Even though this is a short story, there was character development and a great set of minor characters. Each of them had their own personality and even though there wasn’t a lot of time to get to know each other, they were well worked out. They made this short story, along with other aspects, not feel as a short. I loved the mystical kind of old character that was put into this story. Read the book and you’ll know what I’m trying to say.
I also really liked the ‘realistic’ feel, as far as fantasy can be considered realistic of course. The characters really did show how that world was ruled by the aristocracy, in a way they contributed to the world building.

Anne: There were definitely other characters there *nods*. And yes, the mystical character *whooooooos*, I loved that one as well!

What did you think of the plot and the world building?

Anne:  As for the plot, I thought it was grand. The prologue started off with a bang and it didn’t disappoint afterwards anymore either. The story was fairly original, emotional, violent and just all-around cool.There were some surprises. No OMFG, WHAT THE HELL JUST HAPPENED?!-ones, yet nevertheless: surprises. I think with the Goodreads blurb and all the other information in this review, it would be a shame to tell you more about the story because it’s only a novella and you’re supposed to discover it on your own.

What I can say is that the world building was pretty neat. It soon became apparent that the world of Aedaron has magical/mythical elements in it. Like these giant killer worms that live underground and come up and devour you if you make too much noise/movement. Something like this….

…yet with a less rocky scenery. The ones in this book live under fields of grass. The whole system of law and order was also intriguing. But…MEGA GIANT KILLER WORMS!!!

*quietly passes the mic to Cindy*

Cindy: *silently screams* yeah, so there’s that. And since Anne already told you guys about everything we are allowed to tell you in this review, I’ll just sit and wave.

Anne: Ahahaha :’) *goes off to a quiet corner and lets Cindy do all the talking (and waving)*

Cindy: No, but really, the plot was great. At first, I expected it to go one way, then something altogether different happened and I was quite amazed. Unlike Anne, I did experience OMFG WTH moments (giant killer worms… come on… who could have thought).

This book is #1 in a series and also #1 in something like a Saga called Echo of The Ascended. All the books/stories take place in the same world. Knowing that, how badly do you want to read all the other parts in the series now?

Cindy: Consider me sold. I’m a sucker for these kinds of things.

Anne: Badly might be a bit of an overstatement, but I’ve put them all on my TBR-list.

If you could be transported into this world, would you like to go there and what kind of role would you play in it?

Anne: I would, but as with any other medieval kind of setting, only if it’s a return ticket. I’d be terrified if I was trapped in the past, let alone in a world with huge flesh-eating worms! If I could go there (and back again), however, I would want to be a kick ass fighter like Elinor for sure. I mean, I’d usually go for something like a herbalist/healer but not with this one; slashing up evil worm jaws with my broadsword of justice it is!

Cindy: Yes *nods fervently* Yes I would. I’d probably be terrified, pee my pants (I don’t do dresses really), and try to run away screaming, but I would definitely go there. My role would probably be an engineer of some kind, I love building and destroying stuff.

Anne:  Oh dear, remind me to Cindy-proof my house if you ever come this way…:’)

Cindy: You’ll be fine! I only destroy things of people I generally dislike 😛 So I guess you’re safe ^_^ (or are you…)

Anne: *shifty eyes* Let’s move on to the final verdict then!

Cindy: 4 stars, I had expected more pages, though, so I was a bit disappointed there. But nevertheless, it was a great short that had everything I’d ever hoped for… IN A SHORT?! I’d never expected to be so happy after reading this.

Anne: I’m totally agreeing with Cindy here (what else’s new) and giving it 4 brownies. I wish it had a 100 more pages. I know, I know, it’s a freaking novella, but still! And Cindy’s right (again) about there being so much detail in here for such a short story!

We’d like to thank the publisher for providing us with a copy via NetGalley in exchange for an honest review!

22 Comments on Double Review: A Reaper of Stone by Mark Gelineau and Joe King

Review: Chains of Blood and Steel (The Warrior Queen #2) by Karen Gray