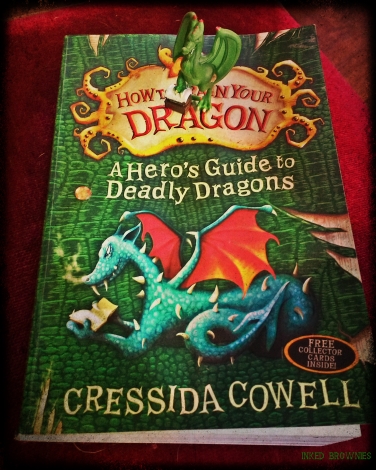 To everyone who’s only familiar with the movie/series adaptation of How to Train your Dragon, I can’t emphasize enough on how the books are SO much better. I mean, the animated version isn’t bad or anything, it’s certainly enjoyable, but the books…the BOOKS!

Yes, one of the biggest differences involves Toothless. In the movies, Toothless is a Night Fury, a big, rare and dangerous dragon. In the books, he’s a Common or Garden dragon, the smallest of all the hunting dragons around. He’s a bit of a scaredy pants and incredibly naughty. He can talk Dragonese, something Hiccup can speak as well, and has a stutter while doing so. If you ever listen to the audiobooks narrated by David Tennant, you’ll never forget Toothless’s way of speaking.

A Hero’s Guide to Deadly Dragons is the sixth installment in the ‘How To Train your Dragon’-series. I highly recommend reading the previous five books first, but if you really can’t or don’t want to, you can also just read this as a standalone book because there are plenty of references/explanations back to the first books.

“It’s Hiccup’s birthday, but that’s not going to keep him from getting into trouble. To save his dragon, Toothless, from being banished, Hiccup must sneak into the Meathead Public Library and steal the Viking’s most sacred book. But the Vikings see books as a dangerous influence, and keep them locked up and under heavy guard. To save his friend, Hiccup must brave the Hairy Scary Librarian and his dreadful army of Meathead Warriors and face off against the formidable Driller-Dragons. Will he make it out and live to see his next birthday?””

This is the first actual printed book I’ve read in the series and I was quite curious to see if I would like it just as much as the audiobooks. I can say it wasn’t a disappointment. The lack of David Tennant is being made up by some hilarious illustrations: 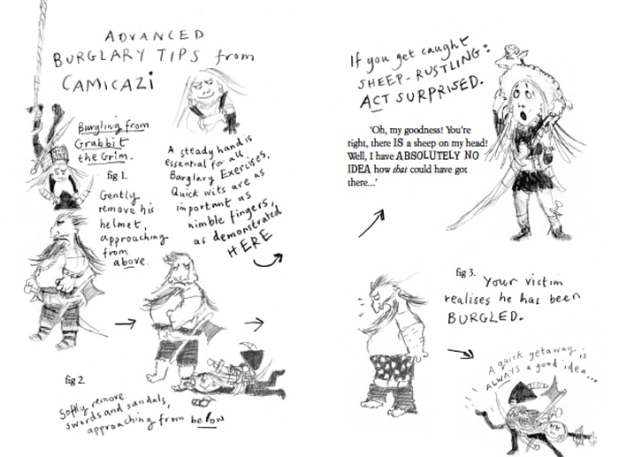 All the illustrations are black and white and in this particular style. There are a lot of them so if this is not your cup of tea, well, you’ve been warned.

I had the feeling this story was a bit shorter than the previous ones, but it’s hard to tell when I never actually READ the others. Still, it was a really fun read, with adventurous suspense and plenty of laughing-out-loud-moments. As a bonus to this book, there’s the ‘real’ A Hero’s Guide to Deadly Dragons at the end, plus a Dragonese Dictionary in which we find out ‘hairy no-brainers’ is Dragonese for ‘Vikings’ and ‘dandruff-di-woden’ means ‘snow’. Now guess what a buttok-thunder is…

All characters are delightful. From the chief of the Hairy Hooligan Tribe, Stoick the Vast, oh hear his name and tremble ugh ugh, to Big-Boobied Bertha, chief of the Bog-Burglars, to Stormfly, the mood dragon with whom Toothless falls madly in love.

The Sunday Express calls this a book ‘Loved by six to nine-year-olds’, but I think it’s more for all ages, really. With the exception of really young children maybe, due to the suspense. For those wondering ever since they looked at the illustration up here: this is NOT a picture book. Lots of illustrations, yes, but only to accompany the full story in text.

If you love Vikings, dragons, children’s adventures and an endless list of crazy characters, you should really start reading these books asap.

I’m giving this one 4 brownies, but only because I felt it was such a short story compared to the others. The first books each get a 5-star/brownie rating from me for sure!

For those who are curious, here‘s what the audiobooks sound like! (Toothless is in the excerpt of Book 3)

Review: They Mostly Come Out At Night by Benedict Patrick