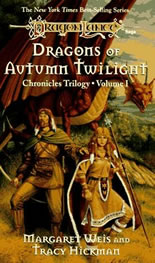 As a fan of the Fantasy genre, and a lover of board- and roleplaying games (mind you, not THOSE kind of role playing games), I’ve been wanting to read the Dragonlance series for years now. I didn’t get to it until a few weeks ago, because A. other books, and B. I only wanted to read the first trilogy in the series in the right order during the right season (dragons in Autumn, Winter, and Spring). So timing was everything, and if I failed to finish my other books before winter started, I’d ‘have’ to postpone the whole thing again for (less than a) year. I’m weird like that.

Probably needless to say, the expectations were set high.
The first page pretty much gives us a good idea what to expect. No need for a real summary!

“An unlikely group of heroes….

Tanis Half-Elven, leader of the companions. A skilled fighter who detests fighting, he is tormented by love for two women – the tempestuous swordswoman, Kitiara, and the enchanting elf maiden, Laurana.

Sturm Brightblade, Knight of Solamnia. Once revered in the days before the Cataclysm, the knights have since fallen into disgrace. Sturm’s goal – more important to him than life itself – is to restore the honor of the knighthood.

Goldmoon, Chieftain’s Daughter. Bearer of the blue crystal staff, her love for a tribal outcast, Riverwind, leads them both on a dangerous quest in search of the truth.

Riverwind, Grandson of the Wanderer. Given the blue crystal staff in a city where death flew on black wings, he barely escaped with his life. And that was only the beginning…

Raistlin, Caramon’s twin brother, magic-user. Though his health is shattered, Raistlin possesses great powers beyond his young age. But dark mysteries are concealed behind his strange eyes.

THE EIGHT ARE GIVEN THE POWER TO SAVE THE WORLD. BUT FIRST THEY MUST LEARN TO UNDERSTAND THEMSELVES – AND EACH OTHER.”

So eight characters go on a quest to save the world. Sound familiar?
This is your typical old school fantasy plot. I have to admit I got bored quite a few times because of the familiarity as in “Been there!”. Then again, there were also parts where I couldn’t stop reading, wanting to find out what would happen next. Like when the group finds out there’s a traitor amongst them and it takes a few chapters of skillfully planted cliffhangers before we find out who the actual traitor is.

“Riverwind’s eyes smoldered. He caught hold of Tanis’s wrist and flung the half-elf away from him with such force that Tanis staggered into a wall, groaning in agony. The Plainsman stood up, staring at Tanis with hatred. Then he turned and stumbled down the shaking corridor, his head bent.“.

Especially the intense hatred part made me cringe enough to make a note on it. They just saved each other’s lives here basically. If Riverwind would be annoyed because of something Tanis has said, that’s fine, but hatred? Dude.

Speaking of exaggerating things, throughout the entire book, we’re being reminded of Raistlin’s great (and possibly evil) powers. At one point, he was described as “…this magic user, though young, was imbued with a strange power and considered very dangerous.“. Where I made a note saying “Dangerous my arse, he can’t do shit!”. The most impressive spell I remember him casting was a sleeping spell. And that took almost all his strength. Maybe he should talk more and hiss less.

I used to be a hardcore World of Warcraft player, and I certainly know a lot more about where Blizzard got its inspiration from now! Of course, a lot of elements of the game are general fantasy elements, but still, I found it funny to see so many similarities with this book. World of Warcraft was probably also heavily influenced by Dungeons and Dragons, and, as can be found on Wikipedia: “ At TSR Tracy met Margaret Weis, his future writing partner, and they gathered a group of associates to play the Dungeons & Dragons role-playing game. The adventures during that game inspired a series of gaming modules, a series of novels, licensed products such as board games, and lead miniature figures.” It’s all connected!

You can see why I was into WoW

My final verdict on this one is that even though it was boring and predictable occasionally (oh noes, the Draconians are coming! AGAIN!), I still enjoyed reading it because it reminded me of good role playing times, and, at times, it was pretty fast paced and heavily equipped with action. Gory action even! I’m giving it 3.5 brownies and a recommendation if you’re into D&D kinds of things. Or just plain old Fantasy.

Here’s a soulful tribute to Dungeons and Dragons, ladies and gentlemen.

Don’t forget to check out this Paleo Chocolate Cake recipe! It’s a match with this book. 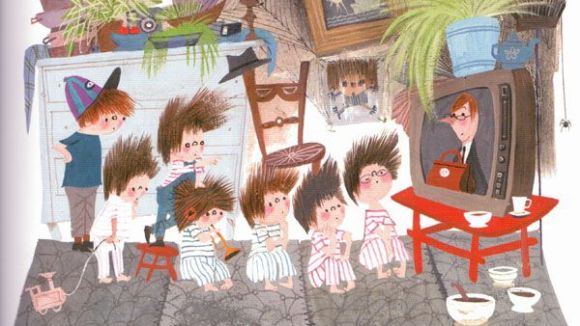