I just realised it’s been almost three weeks since I posted something meaningful on this blog. Okay, to be honest, I didn’t just realise it; I’ve been aware of it the entire time. It hasn’t been three weeks of “I just can’t be arsed” though. Au contraire! The past weeks have been the most eventful ones for me in a long time.

It started on the 3rd of October when I finally got to meet some of my long term friends I met on the internet. They flew all the way from Denmark and Croatia to meet me and attend my wedding. It was so exciting in itself that it even made me forget about getting married a few days later…Boardgame nights with awesome people for the win! (seriously, it’s so hard to find cool people with the same interests in my own region, it’s ridiculous)

Then on the 5th of October, I said yes to the dress! And to my now to be referred to as ex-boyfriend of course.

The day was awesome with lovely crisp October weather. We ate pancakes with about 65 relatives and friends, and the atmosphere was just amazing! To stay close to this blog’s main topic: as a thank you gift, we gave everyone an awesome bookmark. 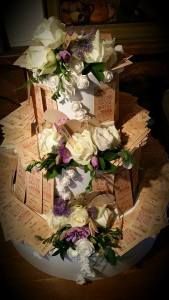 And by everyone, I mean the 10 people who remembered to grab one from the stack.

After some more international awesomeness during the following days (and coming down with a chocolate milk pooing virus), we spontaneously decided (it was suggested at 11:30h and we drove off at 14:00h) to go on a honeymoon to the lovely island of Texel. We thought spending our honeymoon in a town called ‘De Cocksdorp’ seemed very appropriate. And funny. Mostly funny actually. I had another amazing week there! We went swimming, bowling, hiking, and out for dinner every day! We had a lovely cabin with a built in Finnish sauna, which was yet another new experience (I don’t know why people would pay to do this with a bunch of other naked strangers, but other than that, it was alright).

I love lighthouses and I don’t think I’ve ever been so close to one until now!

Being on a windy island in October also creates such cozy circumstances to read in, so I did that as well! Not as much as I would usually do, because of all the other activities, but still enough to be able to finish one book.

With Halloween coming up, I also bumped into the webcomics of Emily Carroll and can highly recommend them if you’re into creepy comics! I first thought the suggestive endings were a bit meh, but after reading them all, I actually think they really add up to the level of creepiness by being forced to use your own imagination after a ‘what just happened?’-moment.
Emily also published a book containing graphic short stories called Through the Woods . I will most certainly browse the webz for an affordable copy!

You can expect full reviews on All the Light We Cannot See by Anthony Doerr and The Peddler’s Road by Matthew Cody here this upcoming week. Hope your last couple of weeks were as pleasant as mine (and my dog’s)! 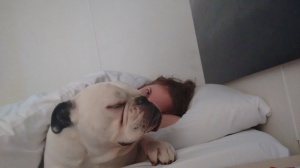 2 Comments on The past three weeks